I’m not a huge sports fan, but when the Oakland A’s go out onto the field, I’m pretty sure they all have the same embroidered A on their uniforms. It’s not just “similar” or roughly the same. They didn’t pick up the thread from different places. The third baseman doesn’t have particular font preferences. The center fielder doesn’t get a larger A so he can garner more attention in the outfield. When we’re a team we share a uniform. There isn’t any question what the Oakland A’s visual presence is.

My high school golf coach also believed in the power of team unity. We had to wear black slacks in 90+ degree weather (when opposing teams from other schools were allowed to wear shorts). Why? He knew that when we looked like a cohesive team of golfers we were sending a visual cue that communicated our unification. It probably even impacted us as players on a cognitive level, which affected our behavior.

What happens when you see visual unity may be subtle, but the effects are clear. When you see unity, you receive a message that that team – or company or university – is organized around a common set of beliefs. It suggests that they have their act together. Their affairs are in order. And they’re a focused and strategic organization with strong loyalty and morale. As a consumer, I can conclude that I’ll probably experience the benefits of those traits when I engage with the organization.

Institutional clarity is one important byproduct of being unified in identity. It creates the common denominator, and for an institution with 300+ units, less is going to translate as more. Simply said, whenever we can create more simplicity in our brand, we can achieve more clarity. Which, in turn, helps people engage with us more easily.

This is demonstrated in carefully chosen aspects of our brand identity, like our wordmark and email design strategies. We’ve also doubled down on the block I as the U of I’s only logo, encouraging primary units to brand up to the block I when a wordmark isn’t necessary. With that iconic logo at the center of our visual brand expression, we can ensure we rally together across campus as a united team. 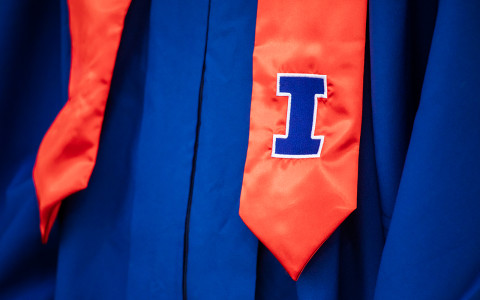